First Visit To the Continent: Skiing In France

When Pat and I started talking about relocating to Scotland, one of the biggest selling points for me was the ease of European travel.  So, when her brother invited us to join him and his wife on a trip to one of their favorite places for an end-of-the-season ski holiday at a bargain price, we quickly said "yes!"  Pat had been on skis once in her teens and I had never skied, but we were certainly willing to give it a try.  Even if we did not like it, we would be in the French Alps, knowing we could find something to do!  And eat!  And drink!

We flew from Edinburgh to Geneva, Switzerland. As we approached the Geneva airport, I was struck dumb by the view from my window. It was truly awesome seeing the mountains coming all the way down to enormous Lake Geneva. Despite what we would see later in the week, I think this view will stay with me the longest. Unfortunately, my photo below does no justice to this stunning sight. 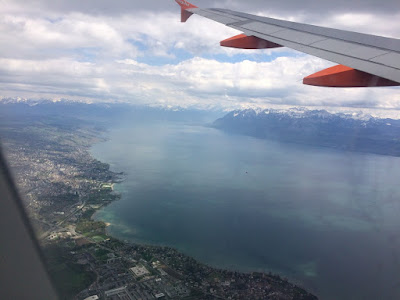 On the ground, we picked up our rental car--back on the right-hand side of the road! We soon entered France on our way to La Tania. It was a beautiful day for a drive. 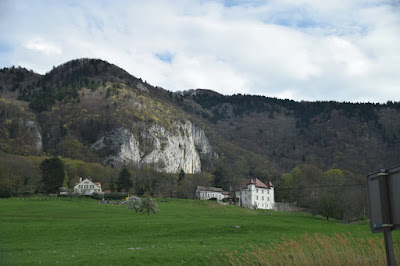 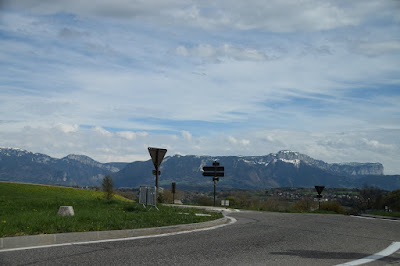 Our first full day in France was mostly relaxing with a little exploring.  We did make a plan for getting our skis the following day though.


The weather did not look like this all day.  After practicing on the nursery slope, we ventured up the mountain to a so-called green run, Verdons.  (The ski slopes--pistes--are rated, easiest to hardest: green, blue, red, black.)  The beginning was very steep, at least for the two of us on our first day.  For added difficulty, we had nearly white-out conditions for a while.  It was not pretty.

The following day was absolutely gorgeous!  Warm, sunny, barely a cloud in the sky, skiing with no jackets.  As impressive as the photos might be, I failed to capture the stunning sights of the day--truly awe-inspiring. 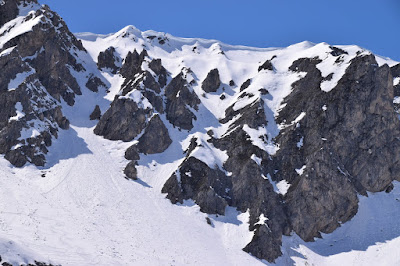 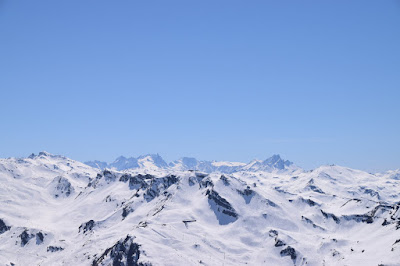 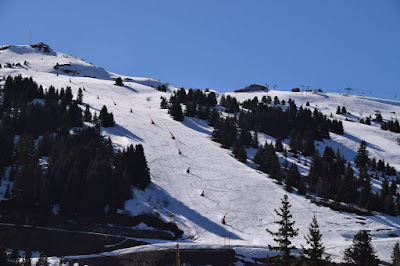 After our long day of skiing at Courchevel, we drove to nearby Meribel for dinner, followed by a lakeside stroll. 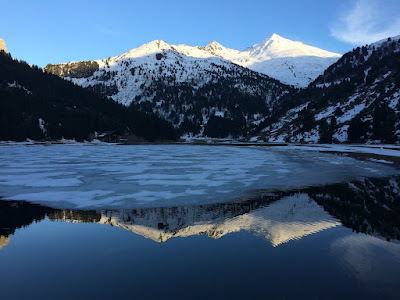 I twisted my knee, falling my first day on skis and Pat was quite sore after two days on the slopes, so we were due for a rest day.  I went for a solo hike from our apartment in the afternoon.  La Tania was closed; most of the snow was gone.  So, I headed up the green slope. 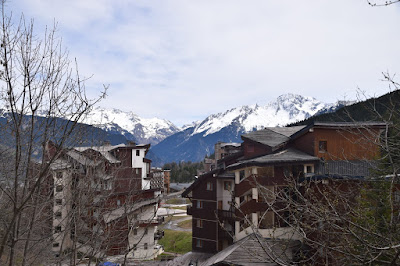 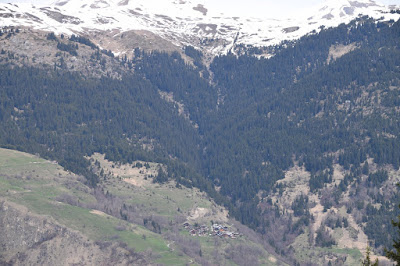 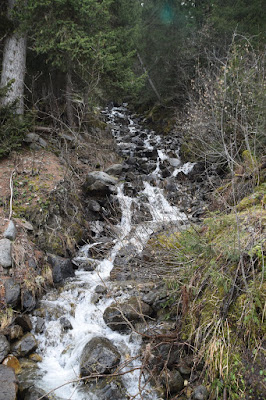 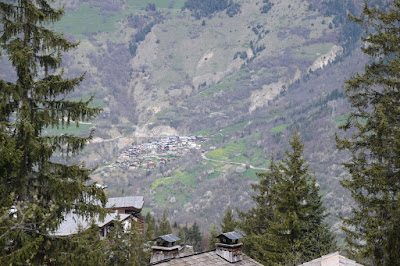 We had started each day with a few runs on the nursery slope to practice.  The morning after our rest day, I did one run and was ready to ski with the big kids.  I was hooked.  I did several runs on my own and I even conquered Verdons!  Several times, in fact!  Don't get me wrong, I rarely ventured off the greens and it was very quiet, but I was feeling like a skier. 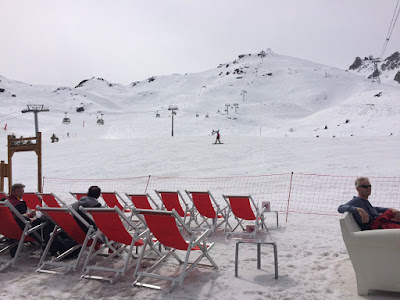 Riding the bubble up the mountain for another run.

Our last full day was great.  I skied a lot; one run after another.  I had another baguette.  It was a beautiful day.  It certainly felt like the last week of the ski season though.  The slopes and cafes were even less busy than earlier in the week.  The snow was receding and getting dirtier. 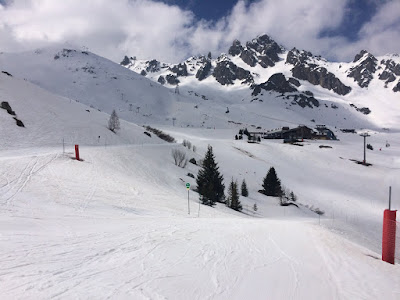 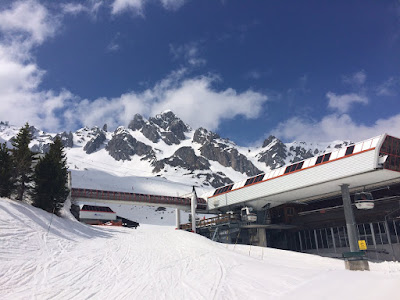 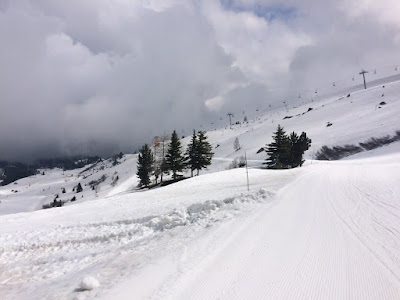 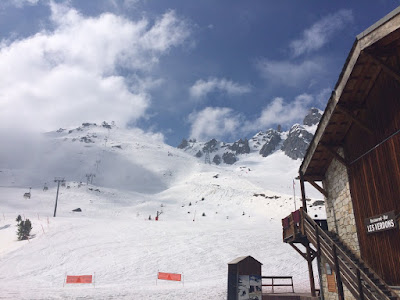 The morning we drove back to Geneva was not as beautiful as on our day of arrival, but the views were remarkable nonetheless, just different. 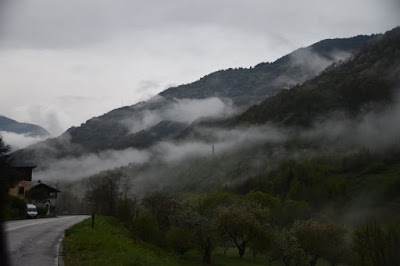 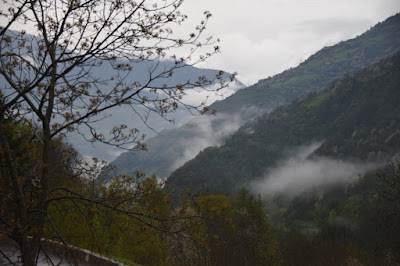 
It was an incredible trip!  I cannot wait to go back, to Europe, to France, skiing--all of it!

Walking Along the Dee

We just had a three-day weekend due to the Early May Bank Holiday on Monday.  After a horrible week of weather last week, the weekend was mostly nice--I am hoping spring has sprung!  On Monday, after being lazy most of the morning, we ventured toward the River Dee, just over a mile walk downhill from our flat.  There is a path that runs along the river from the city well into the shire.  I explored a small portion of it a few weeks ago, just enough to determine it was not going to be easy on the bike I was riding.  This time, we tackled it on foot with appropriate footwear. 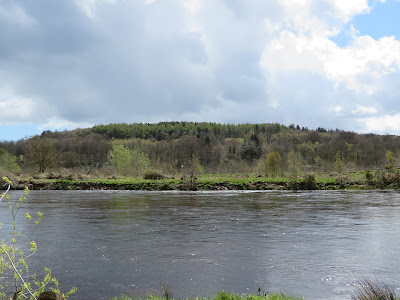 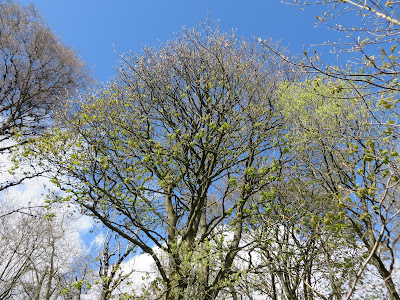 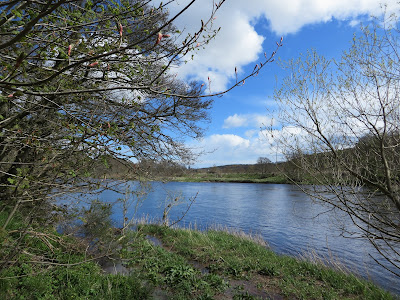 We arrived at the reservoir with a total of about four miles under our feet.  We decided, since there was a Costa in the village of Cults, we would just walk there for a bite and a cuppa.  It was a good decision--while we rested, the heavens opened for several minutes.  By the time we were done though, blue skies again.  We walked back into town via the road for Pat to see that route.  It may be an option for bike rides in the future.  After we returned to town, we picked up a few groceries at Sainsbury's followed by another cuppa and a toasted teacake with butter--we earned it!  By the time we returned home, we had walked about eight miles.

*All photos courtesy of Patricia Pahlmann