First, yes, they drive on the left-hand side of the road in Scotland.  So, "keep left" is my mantra. I have forgotten on a few occasions, but fortunately, those around me were paying attention. Nobody even yelled at me!  An added challenge is that it is legal to park on either side of the road, so I cannot rely on parked cars for orientation.  Second, no, they do not use kilometers; all the signs for distance and speed, and thus, speedometers are in miles or miles per hour. The Brits only partially converted to the metric system.

As I have mentioned before, we do not have a car and we really do not miss it most of the time.  We have had very little difficulty getting around Aberdeen and the rest of Scotland thus far.  Yes, it would be nice when the weather is bad or for big shopping trips or big items. Usually, we manage just fine, with a little planning and, perhaps, a visitor with a car.

Right!  The take-home points regarding getting around in Scotland (based on my 7ish months of experience.) 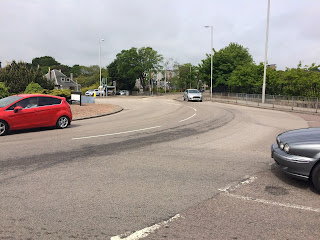 Roundabouts are excellent for maintaining the flow of traffic.  I understand the general concept, but it gets a little confusing when there is more than one lane around--still working on that. Usually, when I am cycling, I just stay all the way to the outside, going around until I turn off. 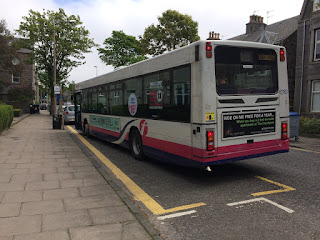 The Aberdeen city buses are a great way to get around town when the weather is bad, for carrying extra shopping, or going longer distances.  I have made a few mistakes with them--timing, different bus companies, routes--but, I do okay most of the time.  I have not found myself too far out of the way, just a stop or two on occasion. They could be a little cheaper, but they still cost a lot less than a car payment, etc.

I love the inter-city trains.  Instead of driving two hours to see family, friends, or the next major city, having to teetotal, stay awake, or just wasting time, we can take the train!  We can (both) sleep, have an adult beverage, watch a movie, read a book, etc while we travel.  The scenery is nicer than that along I72 through central Illinois as well--I think I have seen enough of that. We are actually taking an inter-city bus to Glasgow in July, because it was so much cheaper than the train.  I may share an update after that trip. 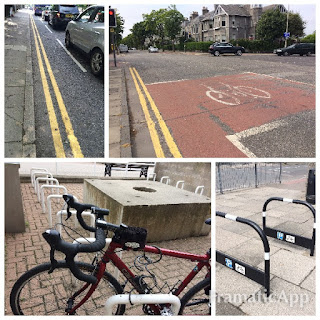 I ride my bike a lot when the weather is decent.  I prefer it to the bus when I can manage it, because I can travel on my own timetable.  I have a rack and bags for shopping too.  I have been telling everyone that it is safer riding in Aberdeen than in Quincy.  Having thought about it in more depth, overall it is probably about the same.  I think that is remarkable though, considering the size of Aberdeen (about 200,000) compared to Quincy (about 41,000).  It certainly is not Copenhagen or Amsterdam, but there is infrastructure: a fair amount of bike lanes and easy-to-find bike racks, for examples.  And, the red box for waiting in front of everyone at traffic lights!  The roads are a bit rough though, at least along my commonly travelled routes.  The two best things about cycling in Aberdeen are 1, there are a lot of cyclists, so people are accustomed to seeing us--safety in numbers!  And 2, I have yet to see a motorist talk on a mobile phone.  Yes, believe it!  Now, a lot of people use there hands-free equipment, but I have not seen anyone holding a phone to their ear and talking while driving. In fact, I hardly see anyone driving a car, doing anything but driving a car. 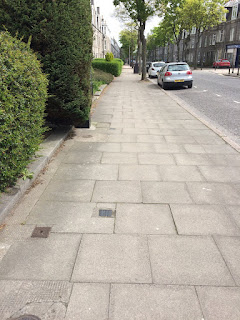 Walking is our primary mode of travel around Aberdeen.  For quick trips over short distances from home, it can be more convenient even than cycling.  Of course, once we are in town, most places are so close, it is the only practical choice. It is a great way to explore too; you can see so much at a walking pace.  The best thing about walking compared to my most recent hometown is that there are pavements (sidewalks) just about everywhere.  I have yet to find a place where I have had to walk several blocks in grass or in the street because of no paved walking path.  The pavements can be a bit uneven at times though--most are small-ish paving stones instead of big slabs of concrete.  Another good thing is that pedestrians are so common:  safety in numbers again and we are less a source of frustration to motorists, because we are expected.