Anyone who knows me, probably knows that I am a runner.  Running has been a major part of my fitness routine for over fifteen years.  That has certainly continued, living in Aberdeen.  I have struggled with my fitness and my performance since the end of 2012 when I injured my foot. With various setbacks, delays, and interruptions, my fitness has only improved very slowly.  However, I am happy to report that I am now thirteen days away from my first road race in Scotland and my first race since March 2015, I think.  I was planning for the half marathon, but scaled back to the 10k after taking a break due to a sore right hamstrings muscle.  Anyway, I am registered for the first Great Aberdeen Run and it is certain to be a personal best performance (best Scottish 10k and best M45 10k, that is.)  I will try to do a race report afterward, but now, I will share some observations about running in Aberdeen, compared to my experience running in the US. 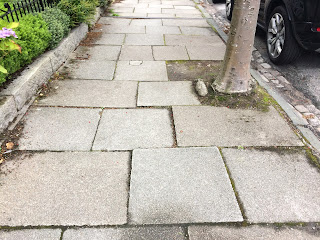 The streets here are generally more narrow than back home.  Also, here in the city, a lot of cars are parked on the street.  So, it is necessary to run on the sidewalk (called "pavement" here) at nearly all times. The good thing is that sidewalks are everywhere.  It is rare that I have to run in grass or through someone's yard ("garden") out of necessity. The bad thing is that much of the sidewalks are comprised of paving stones instead of poured cement. That means that there are lots of joints between the stones where, over time, they become uneven.  I have stumbled loads of times, but I have only fallen once--it was epic by the way, but luckily my iPod and Garmin were unharmed.  I am often reminded of trail running as I run on the sidewalks here, where you have to watch where you place your foot on every step to avoid hazards.  I look forward to racing on the road soon, as opposed to the sidewalk.  There is a nice tarmac-paved, old railway path here where I will run occasionally.  I just do not always want to run the mile to get there and the uphill mile back.

With the weather here, it is rarely too cold or too hot to run outside.  In fact, the temperature is good to great for running most days of the year. Of course, on occasion I have had to run in some significantly wet and windy weather.  I also rescheduled a run or two because of heavy frost. So, it is not perfect, but hard to beat for running weather, in general.

There are a lots of runners here.  There are lot of cyclists here too. Aberdeen, in general, seems to be be an exceptionally active city, in fact.  It is cool to see all of these other like-minded people out and about.  However, I can probably count on one hand the number of times a fellow runner acknowledged me or returned a wave.  (I did get a high five from an elderly gentleman last year as we passed each other running which was fantastic!)  I guess that is just life in the big city.

You know what, though?  I am still running and I have had some really good runs here and will have some more.  So, it is all good!

Hiking In the Cairngorms With the Aberdeen Hillwalkers

As my usual readers will know, we like to stay active and we like to explore.  To that end, we have taken multiple hikes since we came to Scotland, including a few hills.  We wanted to step up our hillwalking game a bit though, so Pat researched local hillwalking clubs.  The idea being that we could go with an experienced group and benefit from their knowledge and perhaps, their gear, transportation, and safety.  We opted to join the Aberdeen Hillwalking Club for a walk on Sunday as guests.

Other than walking through knee-high and taller heather for several long stretches, which as Pat said lost its romanticism quickly, it was a great day in the Scottish wilderness.  Twenty-seven of us took a luxury coach past Braemar, into the Cairngorms National Park to each embark on one of three walk options of eleven or seventeen miles.  We opted for one of the shorter routes that included the peaks of Sgor Mor (813m) and Sgor Dubh (741m) along with two more experienced walkers who took good care of us, starting with instructions on how to properly don gaiters!  Some of it was easy walking; some of it steep; some through thick and deep heather as I mentioned; some of it steep and through thick and deep heather.  Am I making it clear?  There was a lot of heather!  Once everyone returned we started the return trip, making a quick pub stop in Ballatar.  There, I had one of the tastiest pints of Guinness I have ever had! 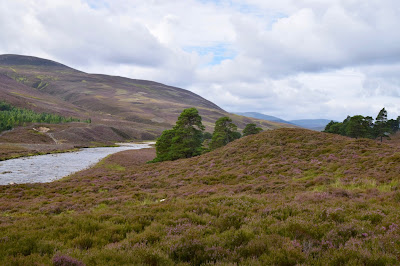 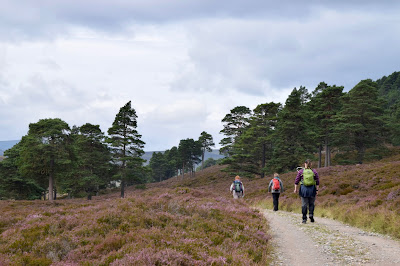 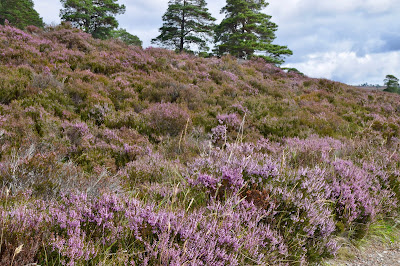 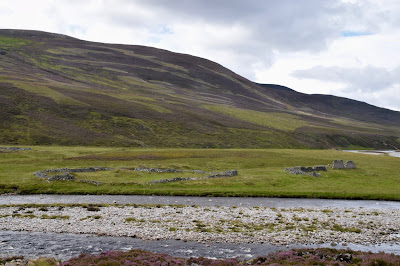 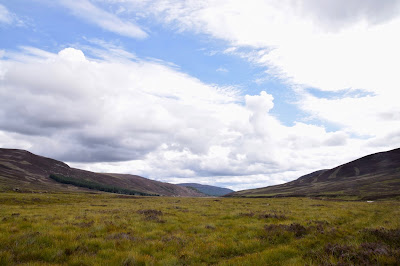 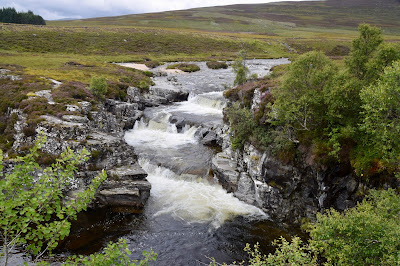 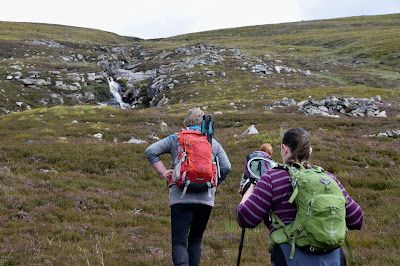 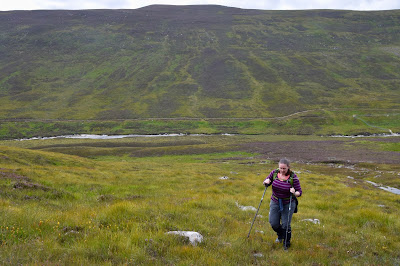 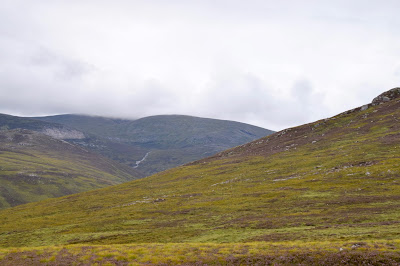 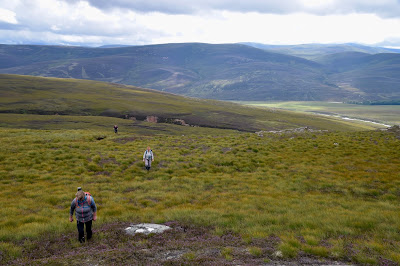 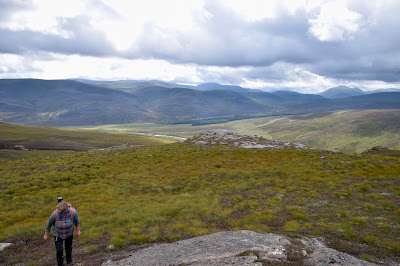 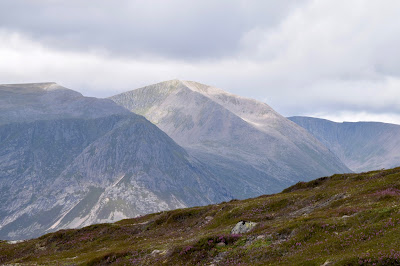 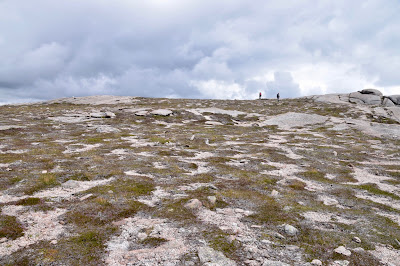 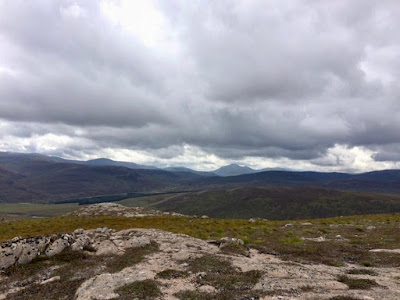 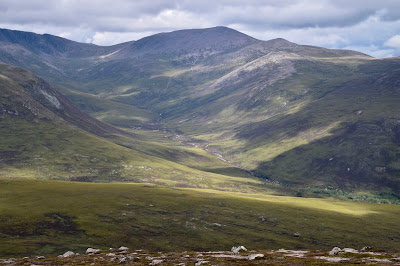 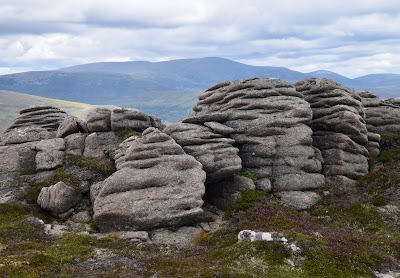 There might have been more photos if not for the rain and accompanying wind that started around the midpoint of the walk.  It dried up before we finished, but I was preoccupied with the knee-high heather.

As I said, it was a great day and we certainly expect to become members of the Aberdeen Hillwalking Club so we can have more adventures with them and become better hillwalkers.