I am generally not homesick and I am certainly not complaining.  I am merely sharing a little about my life in Scotland.  In fact, it appears my lifestyle posts reach more people than my travel posts!  This is mostly a list of things I have yet to find, regularly at a reasonable price, since I moved to Scotland; but also, things I may have taken for granted; and, just some things I miss from from my first 45ish years in the US.

1.  First and foremost, of course, I miss family and friends: I am thankful for technology that allows me to easily stay in touch though.  We would happily accept more visitors! 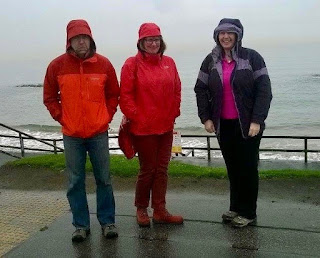 2.  Warmth!  Until this winter I had been saying that the mild winters were a good trade for cooler summers.  However, this winter, we have had temperatures similar to an Illinois winter.  At least we have not had much winter precipitation here in Aberdeen.  I think our purchase of Yaktrax after some early winter ice assured that!  I also miss forced-air central heating or maybe I should say less expensive heating.  Our radiators do not seem to do as well and gas is not cheap.

3.  Space.  Our flat is small-ish.  Our garden (yard) is small--not necessarily a bad thing, since small = low maintenance.  We actually have a fair amount of storage here, including a garage and a cellar, but we have to be a bit creative storing things within the flat itself.  When we were looking for places to live, a LOT of homes were ruled out right away because they had very little storage.

4.  Food and drink--this is the big one.  I should first say that the food here, in general, is very good.  We have rarely had a dissatisfying meal out.  One notable exception actually was a meal at TGI Fridays!  We have access to a truly amazing selection of fresh seafood, butcher shops are relatively common, and the produce is generally good in quality and variety.  Anyway...

a. Good Mexican or Tex-Mex.  There are 3 decent burrito places (2 local, 1 chain) a la Qdoba or Chipotle here in Aberdeen, but the ingredients are not quite the same.  There are a few other places that serve what is described as Mexican or Tex-Mex, but...it just is not the same.  Some is just...not good.  My two big complaints are that they too often use chipotle--smoked chillies--and dishes are often hot, just to be hot--not a lot of flavor.  Fortunately, I expected this and I can cook my own.  I also just learned of a Mexican grocer that I will have to visit in either Edinburgh or Glasgow on my next visit.  Hopefully, I can find some ingredients there that I have been missing.

b.  Calhoun peaches.  Like I said, the produce here is generally good and there is a good variety, but nothing matches a good Calhoun peach.

c.  Bourbon.  Jack Daniel's and Jim Beam are everywhere, but I rarely drink them.  I usually buy Buffalo Trace or Bulleit, which are easily found at a reasonable price.  I sometimes get Maker's Mark--my go-to bourbon back home.  But, it is rare to find some of the higher end bourbons without paying a lot.  I have found Basil Hayden, Booker's, and Baker's on Amazon though.

d.  California wines, specifically Zinfandel.  Like bourbon, they are around, but they are often hard to find and expensive.  And, I cannot find some of my favorites.  Having said that, we have found some really good French and Spanish wines, among others.

e.  Dentyne Fire spicy cinnamon gum.  Luckily I found this on Amazon and I have had some delivered/sent to me from family. 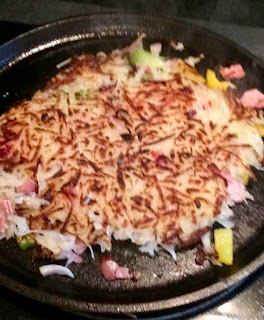 f.  Larabars, especially the chocolate chip brownie ones.  My parents brought me some of these, but that was about a year and a half ago--those are long gone.  I found some similar bars, but they just are not the same.

g.  Specific restaurants.  Do you have that one dish at a particular restaurant that you love that you cannot find anywhere else?  Yeah, I have several of those...

h.  Horse shoes!  At least I can easily make my own sans the Texas toast.  However, they are not as satisfying as those from D'Arcy's Pint or Jackson Street Pub. (see above)

i.  Hash browns.  If you order hash browns at a restaurant here, you get little triangles similar to the ones at McDonald's (which, of course, we have here.)  I am talking about shredded potatoes cooked on a flat top.  None here.  I practiced these before we moved too.  A few months ago, I made a passable version which satisfied my craving, but they are a lot of work so I do not make them often.